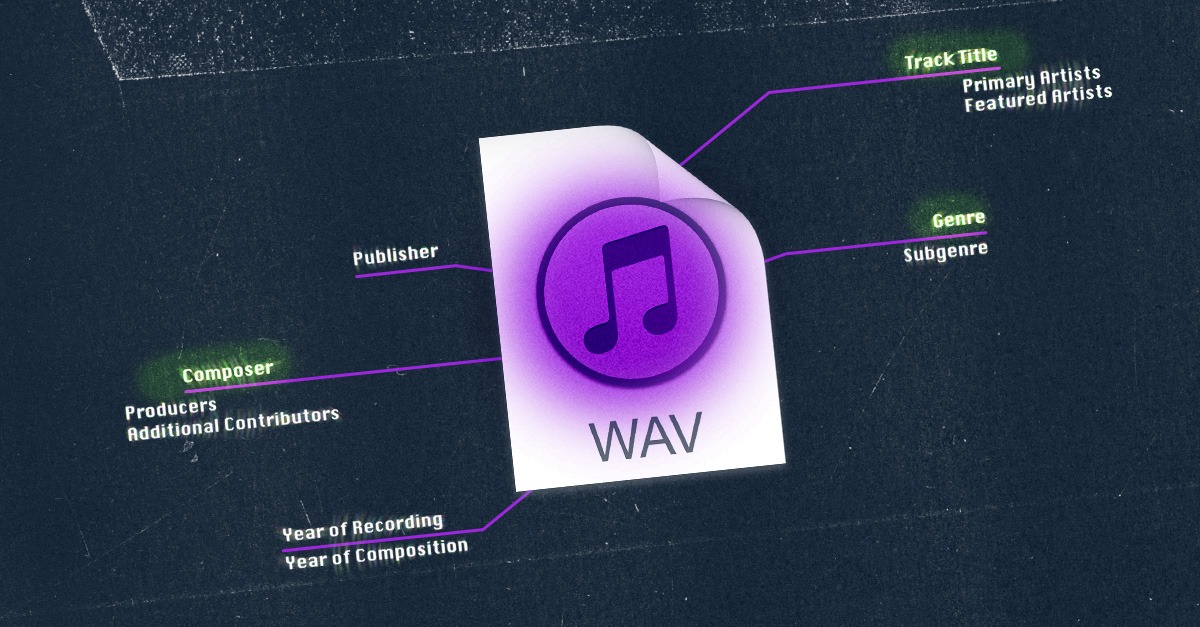 Editing music metadata is arguably the boring side of music. But it’s all part of the process of making sure your music is heard, and that you are paid properly!

Why is editing music metadata important?

Editing music metadata is important because it’s how people will know who a song was by. It displays the name and people involved in the creation of the song and recording.

Understanding music metadata helps you to understand other parts of the music business, such as:

If somebody with an opportunity hears your song, they need to know (at least) who:

This information is stored in a music file, in what is known as “metadata” (data within data).

Think of music metadata as digital versions of the liner notes you get with vinyl records. 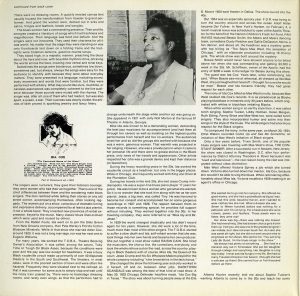 What is music metadata?

Music metadata is the data which accompanies a track to give people information about a song. There are different types of music metadata. Descriptive data describes things like genres, albums, artists, instrumentation and other ways of “categorizing” music. Rights management / copyright ownership data tells people who owns and manages the music.

You’ll recognise metadata if you use a media player or car stereo. Metadata shows the artist name and song title, rather than filename, when it plays.

In the world of streaming music, descriptive metadata is extremely important. Not only does it ensure music is displayed correctly (as well as extensively, such as with lyrics), it also drives algorithms and album/playlist categories. When you find music on Spotify, iTunes, Discogs or any other service or platform that hosts music with categorization and search functionality, this will be sorted by metadata.

Rights management metadata displays who wrote and composed a song, as well as who owns the master and publishing rights. It also often provides contact information. This metadata is more “hidden” for the use in the music industry rather than being displayed openly for general listeners.

An MP3 or AIFF file gives the ability to attach this metadata in what’s known as an ID3 tag.

When sending or pitching music to people you want to hear it, think about how that music might be stored. Equally, how they search for music when they need it for a project.

Music supervisors have projects, like a movie scene that needs a piece of music to support it. To find the perfect track, they go hunting. They usually start with their own libraries – and they use metadata to search through.

Record label executives do the same. They might be looking for:

When you should be editing music metadata

First and foremost, filling out your metadata immediately can ensure it is done and ready.

Make metadata part of your process of music creation. Therefore, it’ll feel less like an admin task that’s needing to be scrambled together later.

If you are mastering your own work, most DAWs will allow you to bounce an MP3 or AIFF version with metadata.

In addition to creating an MP3 or AIFF version, you’ll also want to create a separate database (which could be as simple as a spreadsheet). Use this to track all of your metadata in one place. Then, if it’s requested you know where it is and it’s ready to go.

If you haven’t done that yet, there’s no time like the present to review your catalogue. Get your metadata together into a sheet and put your back catalogue to work by submitting it to be considered for sync representation.

Editing music metadata with your distributor or streaming platform

Streaming metadata works differently depending on the hosting platform. You will be asked to add metadata either through your distributor or on the platform directly.

If your metadata isn’t right from the moment you release and distribute your music, you will be categorized incorrectly. This means your music will not be found where it’s supposed to be.

Metadata is different for each and every track. If you have different versions of the same track, there will be variations in the metadata between each version. An example is the original and instrumental mix requiring different metadata.

Now we’ll get into what metadata consists of…

This seems simple, but there is a bit of formatting technicality when it comes to featured artists and different versions.

A featured artist is when a song is written/performed by a primary artist, and another artist collaborates on the track.

If you’re looking for a featured artist, don’t forget you can use the Vampr app – find and connect with musicians, songwriters, singers, composers and producers all over the world!

The decision of who the primary artist is and who is featured typically comes down to a mutual agreement about who has the most “credits”. Or, who it benefits most from a brand perspective to be the “face” of the release.

If you have a featured artist, the artist should be featured in the Song Title.

So, a song by Jimmy Rick called “Freaky Soup”, featuring Princess, would have the Song Title “Freaky Soup (feat. Princess)”.

The other time Song Title is particularly relevant is when you have more than one version of a recording. There are various version types, such as; Instrumental, Acoustic, Remix & Acapella.

Again, you would put the version in brackets following the title itself:

The Artist field should only contain the primary artist. This could also be a band name. In our example above, this would be “Jimmy Rick”.

This is important because it helps sort the catalogue and discography to the right categories. If this metadata is filled correctly, the track/release would correspond to the primary artist’s main discography. It would show as a “credit” for the featured artist(s).

There is a metadata field called ‘Album’. This is used to group songs together into a higher level collection.

If your track is [being] released as part of an EP or LP, you can put that title in this field. Otherwise, it can often be used by libraries, sync agents and record labels to categorize and package your songs for their internal use.

The composer field is where things get a little more tricky…

The composer name is usually the legal name of the credited writer(s), not the artist alias they perform under.

Some writers decide to exercise their moral rights to be credited for works under a pseudonym.

This depends what name you have registered under with your Performance Rights Organization (PRO).

You will typically credit every writer involved. Also, the percentage of credits they have for the composition and all of their PRO identification numbers, known as CAE/IPI numbers.

This should be relatively simple if you’re signed to a PRO. Your ID number will be available to you from their site or in their correspondence.

Getting an ID number from other artists can be trickier.

If your collaborator isn’t registered to a PRO, you can leave that out in the song metadata. – But, always outline the credit split.

Your Composer metadata should look as follows:

If there is another writer:

The percentages should reflect whatever was agreed upon between you and your collaborators.

These are relatively easy, so we’ve grouped them together.

The Year is the year of RELEASE for the version of the recording. If the song is unreleased, the Year will be the current year.

BPM (beats per minute) is the tempo of the song. This is usually known at the time of creation, but if stuck, you can use a metronome to help find the BPM. Digital tools can help find the average BPM of songs which change tempo.

Although created for a different use, we use the Grouping metadata to help us identify rightsholder information.

Grouping is another of the more ‘tricky’ fields of metadata.

Where Composer helped identify the splits of the writers, Grouping helps identify the owners of the copyrights.

There are 2 primary copyrights involved with every recording of a song:

Publishing: This copyright protects the ownership and use of the composition and lyrics of a song.

Master Right: This copyright protects ownership and use of the recording of a song.

There’s lots to talk about when it comes to these two different rights. The most common example of explaining the difference is when we talk about covers.

You can see how tricky this would get if somebody sampled a recording of a song that was written by 4 different unpublished writers. The person who sampled would need to know who all of those rights holders are to obtain their permission to use the sample.

Grouping greatly helps with this process by outlining who permission is needed from to obtain a license. This is also the case for a sync license needed by music supervisors.

Often, an independent artist will approach Grouping and think… I’m not signed! How do I fill this out?

The answer to this is more simple than it seems. If you haven’t signed your rights to a record label or publisher, then you are your own record label and publisher!

Here are some examples…

If you have signed a song to a record label, but kept your publishing rights, your Grouping might look like this:

If you have signed both your master rights to a record label and your publishing rights to a publisher, your Grouping might look like this:

If somebody is representing your music, they would signify in the Grouping that they have 100% permission from all rights owners to represent that track on behalf of the owners. This deems the song “pre-cleared / one stop” for licensing.

When you assign an agent the right to represent tracks on your behalf, you give them permission to enter a deal in your name.

Before you get to that stage, you have to ensure that all copyright owners have agreed to this representation.

This deems the music “pre-cleared” or “one-stop” for the representative agent party. It’s then easier for licensees to move forward with licensing a track, as they don’t have to go to multiple parties to obtain permission for usage.

Referring back to the Song Title, there are often different recorded versions of a track. The version of the track should [also] be referenced in this field.

Each Mix Version should also be registered with a Collective Management Organization (CMO). They exists to register the copyright of master recordings. Each version will be assigned their own International Standard Recording Code (ISRC – see below).

ISRC stands for International Standard Recording Code. These can be issued from a CMO (like PPL in the UK), or auto-generated by your distributor when you release music online.

You get a unique International Standard Musical Works Code (ISWC) every time you register a new “work” (composition/song) with your PRO.

PRS, in the UK, generates ‘Tunecodes’ (which also begin with “T-”) and can be used in placement of ISWC if you have stated the track is registered with PRS.

When sending metadata to the Vampr Publishing team, we currently ask for it to be sent in a spreadsheet template we’ve provided. Here’s a handy video for how to fill that out:

✅ Register as writer/composer with PRO

✅ Register your work with your PRO

✅ Store all of your metadata in a spreadsheet with correct formatting, so you can quickly pull it out when requested

✅ When you have a bigger catalogue, consider using a more efficient system for metadata collection and archiving