Here is an exclusive interview with Dorian Perron! Hope you enjoy.

Of course! I started as an indie music blogger in 2013, sharing music that I liked and thought didn’t receive the attention it deserved. I also organized live acoustic sessions at my place and live shows in Paris with indie rock musicians such as Ryley Walker, Plants and Animals etc. It was more passion than a job, but the virus caught me (not the one you’re all thinking about ;)). I met with my co-founders Romain & Rafaël in California in 2018, they had music projects and had struggled with getting their new tracks heard from blogs, radios, record labels etc. On my side, even knowing my blog Indeflagration was small, I was receiving over 100 requests per day from artists and their representatives wanting to get their music featured!

When we met in California, we wanted to help independent artists, that was for sure. We knew they had problems and wanted to do everything at once. But instead of going right into it, we started by taking phone calls with more than 200 musicians and music industry professionals for a full month, and we understood very quickly that the most major issue they were facing was related to the nightmare they were experiencing to promote their music and try to get heard. That’s why we created Groover. 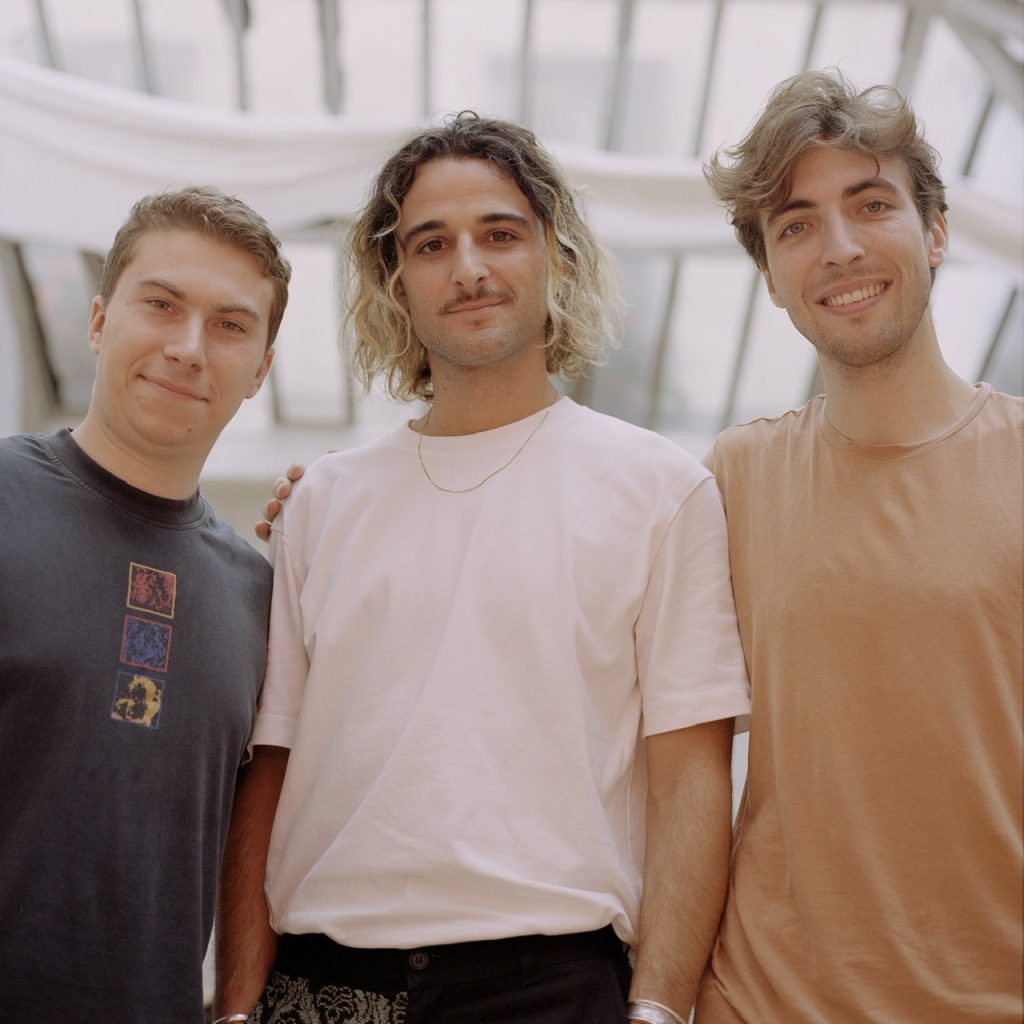 Through those calls and meetings, it was not hard to realize that artists needed help in order to stand out from the crowd when supposedly 80,000 new tracks are released each day on Spotify. We realized that the biggest bottleneck exists after the track is created, recorded, mixed/mastered. The barriers to production and distribution are already brought down thanks to production software, streaming platforms and digital distributors.

That’s why we created Groover when we came back to France from California. Our goal from the start has been to help artists emerge through influential channels such as blogs, radios, playlists curators, starting with guaranteeing that their music would be listened to and that they’d receive feedback. To help them break this wall of the first listening that could change things, and sometimes change everything.

To say it short – be ready for the sales pitch 😉 – Groover is the web platform that helps artists get their music heard. Groover connects artists who want to promote their music with the best curators, radios and labels seeking emerging talents.

To get started, it’s easy! You can add a Youtube or Soundcloud link to the track you’d like to promote, and send your music directly to a selection of blogs, radios, playlist curators, record labels and pros of your choice, get feedback guaranteed, build your network and increase your visibility. Feel free to have a look at this short guide to get started easily on Groover

Groover is for all independent artists who want to get more people to listen to their music, to build their network and progress. We’ve been amazed by the kinds of artists who have used Groover to increase their coverage through blogs, radios and playlist curators so far, from amazing projects such and labels as Nico & Vinz, Tchamy, La Femme, to complete discoveries and artists releasing their very first track. You can even use Groover to get detailed feedback on your unfinished track from mentors and sound experts, and also get in touch with record labels, publishers & managers.

Let’s also note that Groover is also a great tool for artists representatives such as managers, record label owners, publishers. They can capitalize on their recurring use of the platform to target even better the right contacts for all the artists they work with. 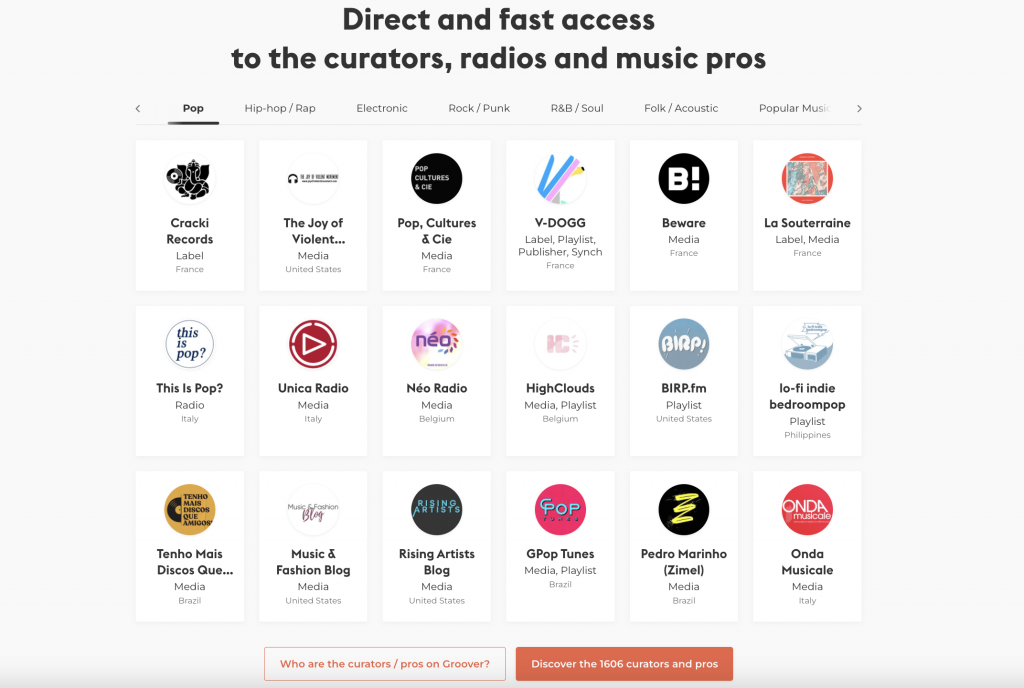 What Groover guarantees is that artists will get their tracks listened to and feedback from the curators and pros they’ve reached out to. If some don’t answer after 7 days, the artists get Grooviz – the name of our credits on the website – back. The current answer rate on Groover is around 90%. This means that if you send a campaign to 40 contacts, you’ll get in average 36 answers and get Grooviz back to send your track – or another one! – to 4 more music curators & pros of your choice.

You must wonder what kind of feedback you can expect. All the curators & pros have to agree to a charter before they’re approved on Groover, and to several principles. The most important ones are: be informative and constructive, explanatory and sincere, benevolent and encouraging. We want artists to get value out of the feedback they receive, be pushed forward, either understand how their music is perceived or find ways to improve.

The content of the feedback depends a lot on the types of curators you’re reaching out to. Mentors, sound specialists, record labels, managers will naturally tend to be more detailed and comment. On the contrary, radio stations and playlist curators sometimes have trouble judging a track on top of saying it’s a fit for their list or not.

More interesting of course is the fact that curators and pros can share the tracks they receive or get in touch with the artists. It happens on average in 20-25% of the cases, with huge variations based on the quality of the music and the accuracy of the targeting. Since Groover started, there have been more than 1 million pieces of feedback given, 250k shares and more than 500 signatures with record labels… That we know about! 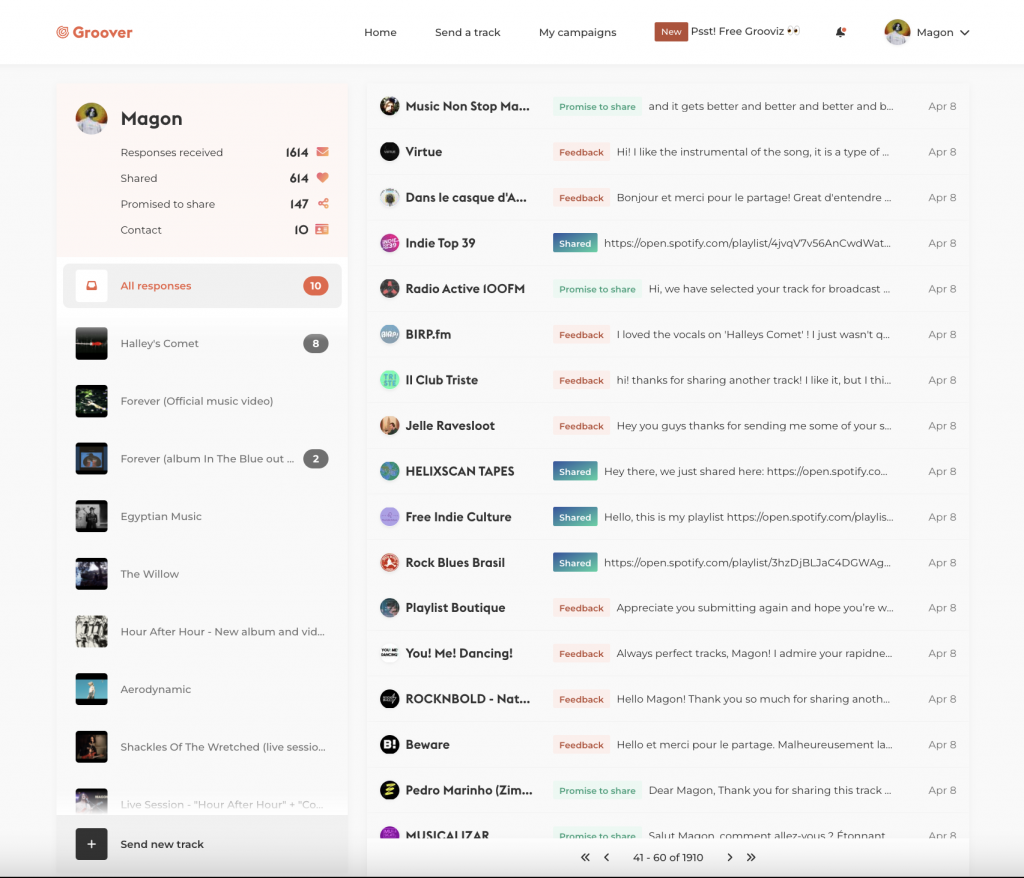 I’ll say it shorter on this one haha 😉 First, they get the tracks in an optimized dashboard which is as easy to use as a playlist, they can make their decision and share the tracks they like through it and save a lot of time. Second, they get high quality music much more in their editorial line since we guide artists to choose the most relevant curators and pros for them. Music curators & pros on Groover tend to receive really amazing music on the platform! Third and last, they get paid for each reply they give, whatever their decision is. So they keep their complete editorial independence while discovering new music gems at the same time.

So many… I mean, so many things I wouldn’t have imagined would happen! Starting with how the team evolved, with now more than 35 people working for Groover who amaze me and my co-founders Romain and Rafaël every day.

And also of course there’s nothing more satisfying than witnessing artists who’ve been using Groover from the start getting amazing results, making life changing encounters, building their team through the platform… And killing it on stage! Our artist accelerator Groover Obsessions is also particularly dear to me as it was a dream to be able to help artists boost their careers even further. The 30 artists who are part of it are family now, and we have a team of 5 working every day on pushing them to where they deserve to be. 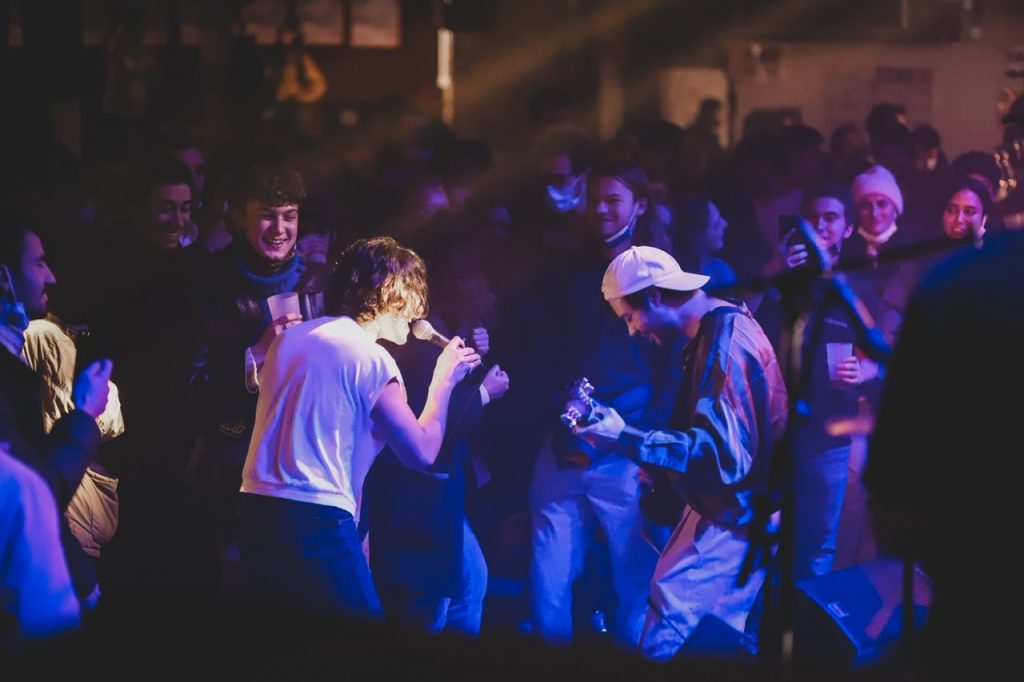 Oh, I know! People are extremely creative in the music space, it’s extraordinary. But on the contrary, you won’t find as many people being very… let’s say… organized. When I was doing my studies, I started a small music blog and I was able to obtain so many free festival passes, vinyl discs, CDs just by sending professional emails detailing exactly what I was going to do in return. More generally, this also has to do with the fact that the music industry can be much more open to newcomers than other industries, especially on the “pro” side.

So the first piece of advice would be: always try, you’ll never regret it. You can try to get in touch with whoever you want in the music space, nothing can stop you if you’re nice, professional and if you know what you want!

The second piece of advice, especially if you want to start a service/platform would be to talk to the people you’re trying to address. Before starting Groover, we interviewed more than 200 artists and music professionals, long and detailed interviews that led us to understand how much promoting your music as an artist was painful and how game changing it would be to solve that issue.

We hope you liked our exclusive interview with Dorian Perron!

Want to try Groover out? Pirate users can now enjoy a 10% discount. Sign up on Groover and use the code VAMPRGROOVERVIP [more explanations on how to apply the special discount here] 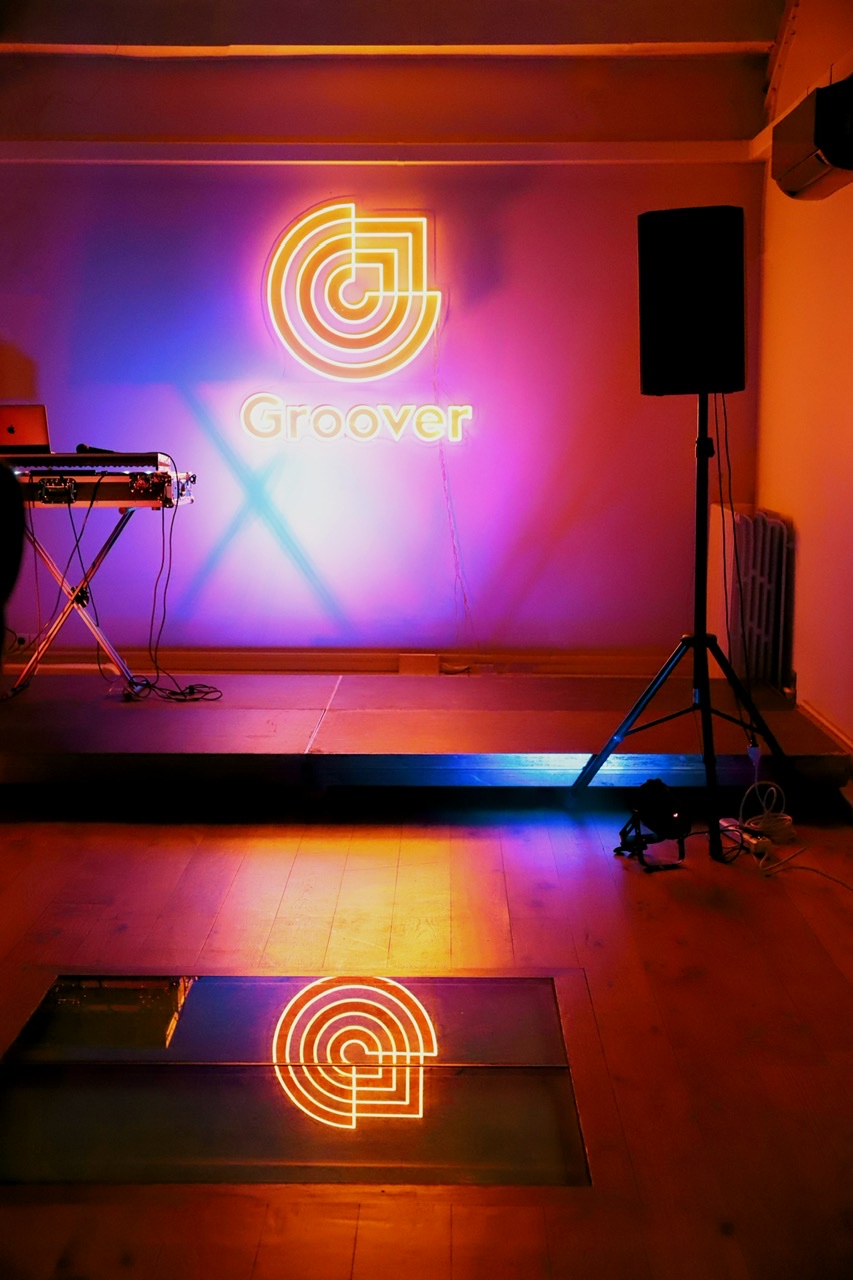 Today’s update brings with it three wonderful pieces of news for our new and prospective investors.

First up, Josh was named Founder of the Week on LAMA — a platform which hosts interviews between thought leaders and professional journalists 😎

You can watch the video interview by clicking here or download the LAMA app on iOS or Android.

Second up, we are pleased to announce that we have crossed yet another milestone in our equity crowdfunding campaign, with our 400th investor (actually 404th at time of writing) joining the company and supporting our movement 🚀

Finally, we are pleased to report an additional $12,000 received in Regulation D funds this week, bringing our private raise tally to $66,100 🥂

If you haven’t yet seen our campaign page, please check it out and consider an investment at http://www.wefunder.com/vampr